Elektron's instruments have, for some time now, come equipped with a feature called the Turbo MIDI protocol. This feature purportedly increases the speed that MIDI messages are transmitted between devices for which Turbo MIDI is available and engaged. This would seem like an improvement to any musician who cares about timing between multiple instruments linked by an otherwise standard MIDI connection. Unfortunately, the language Elektron uses to describe Turbo MIDI is a bit unclear.

From the Octatrack manual, "Connecting the Octatrack to other Turbo protocol compatible gear, like the Machinedrum and the Monomachine, makes it possible to increase the normal MIDI bandwidth by up to 10x. This increases the accuracy of MIDI clock signals as well as the timing of CC messages."

The Octrack manual suggests improved MIDI timing is possible with the Turbo MIDI protocol, but the Monomachine manual only references file transfers between machines. The manuals for more recent Elektron instruments are even less descriptive about what exactly Turbo MIDI does than these two. Does Turbo MIDI improve timing between two equipped devices? I decided to take some measurements for myself to see what was going on.

To test the effect, if any, of using Turbo MIDI for communication between two Elektron insturments, I used the Octatrack and the Monomachine. For my tests, the Octatrack was the master device, sending clock and note data to the Monomachine. The only other commercial devices that use Elektron's Turbo MIDI protocol is the Social Entropy Engine, which I did not have access to for this test.

I performed mutltiple tests for the following conditions: For each condition, I measured the timing delay between the click of the Octatrack's metronome and a simple high-pitched sine tone generated by the Monomachine every quarter note of 4/4 measure. The Monomachine's tone was triggered by the its own sequencer for consistency across all three test conditions. The aforementioned timing delay was measured for normal MIDI, Turbo MIDI x2, Turbo MIDI x5, Turbo MIDI x8, and Turbo MIDI x10 settings. 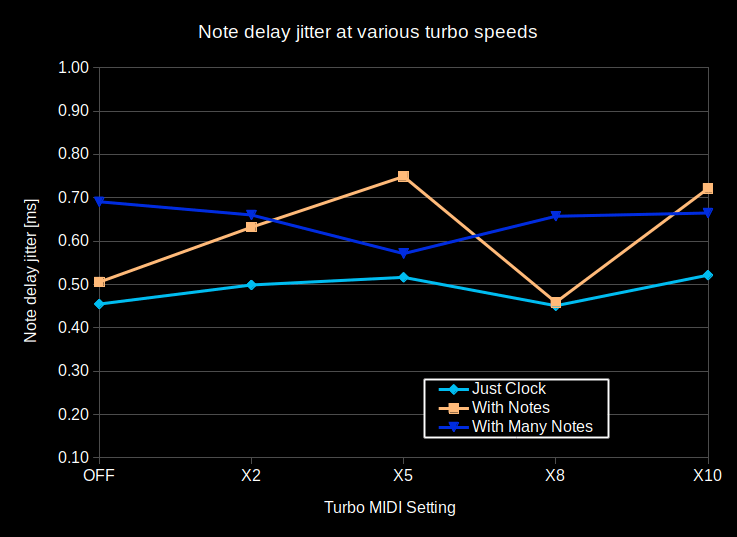 The data suggests a small reduction in note-on delay times for increasing Turbo MIDI multipliers in the "just clock" condition, but the situation for other conditions is less straightforward. Certainly these results are not what one expects when reading a setting label like "Turbo X10!" I will leave a more detailed interpretation of these results to the reader, but will note finally that I am somewhat disappointed by them.