Part I: What and Why

When people use the word "tremolo" to describe an electronic audio effect, they are describing the rapid volume modulation of a sound. This type of effect is common in film music of the 1960s and in country western music of the same time period. For an example of this effect, listen to the following audio clips:

A guitar sound without tremolo:

A guitar sound with tremolo:

Unfortunately for musicians everywhere, Fender decided that the extra electronic components required for the harmonic tremolo were too expensive, relative to those of the more typical tremolo. Thus, this cool effect was cast aside in the name of profit.

I chose to recreate this effect with modern components and accoutrements so that present-day musicians could have access to this forgotten sound.

The schematic I based the re-imagined circuit on was the 6G4 Fender Super Amp. While various implementations of harmonic tremolo found their way into Fender amplifiers of the era, I chose this specific schematic (and thus specific implementation) of the harmonic tremolo because I was already familiar with the amplifier's timbre. Having a reference point is important!

Figure 1. The schematic of the 6G4 Fender Super Amp. The harmonic tremolo bits are in the vertical center towards the left-hand side of the schematic.

Broadly speaking, the harmonic tremolo circuit works in the following way: First, the audio is split into separate treble and bass signals with the resistors and capacitors wired to the grids of the 7025 tube in the center-left of the schematic. Then, subaudio control signals of opposite phase are superimposed on these two audio signals via a network of 1M resistors to the left of the frequency-splitting circuit. To reiterate, these control signals are not within the human hearing range. The superimposed signals reach the grids of the center-left 7025 tube, where the subaudio and audio signals do different things. The subaudio signal controls the gain of the valves, while the audio signal is acted upon by that gain. The treble and bass signals are then combined and sent to the rest of the guitar amp and eventually make their way to the speaker. The control signals are rejected from the rest of the audio path by series-coupling capacitors.

The aforementioned opposite-phase control signals come from the circuits shown in the vertical center, all the way to the left in the schematic. These circuits form a low-frequency phase-shift oscillator that drives a simple phase inverter. This neat design requires only one tube for both the oscillation part and the output drive part.

To recreate this harmonic tremolo effect for our modern times, I redesigned the circuit to use modern ICs instead of vacuum tubes. The tubes that performed the volume modulation on the different frequency bands were replaced with Voltage-Controlled Amplifiers (VCAs), and the low-frequency oscillator was replaced with a microcontroller. A few other changes were required to adapt the circuit to a more typical guitar-pedal format. The schematic of the analog signal path is given below: 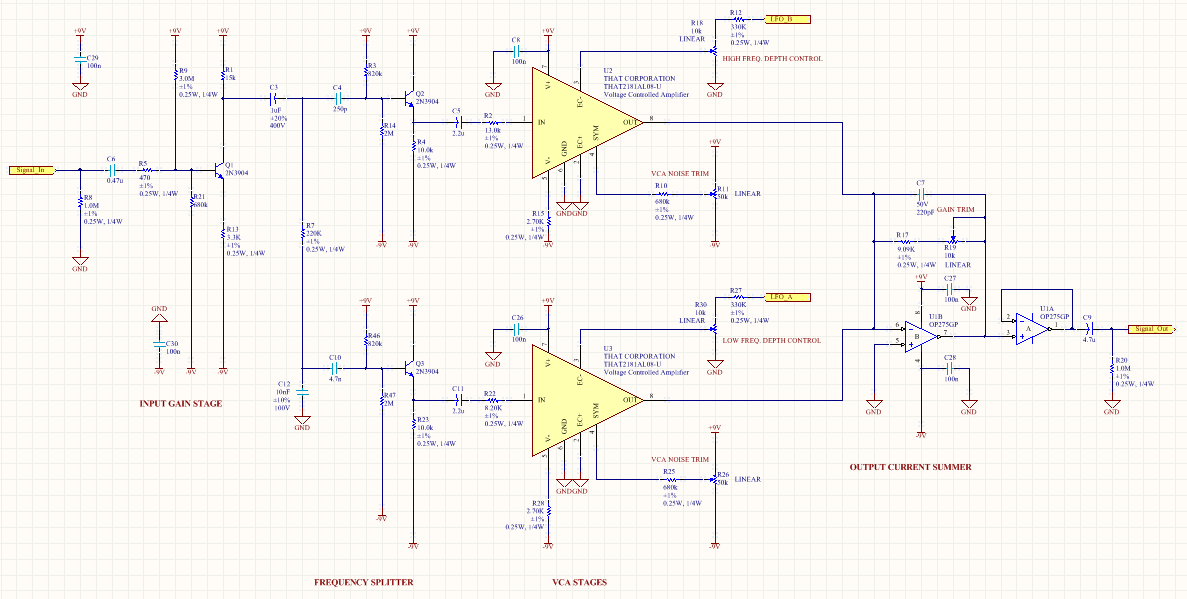 Figure 2. The analog section of the Super Tremolo pedal. Click the image for a complete PDF with all schematic pages and details.

The guitar signal first arrives at the input stage, then makes its way to the frequency splitter stage, followed by the VCA stages, and finally comes to the current summing stage before making it to the output.

It may seem a bit obtuse, but the best way to explain this design is from the middle first, where the Voltage-Controlled Amplifiers are found. The VCAs are the most critical part of this circuit: They are the devices used to modulate the volume of each frequency range. Most of this design focuses on how to get the VCAs to play nice in a guitar-pedal setting. Two VCAs are used: one for the higher audio frequencies, and one for the lower frequencies. Only one VCA circuit is shown here, for simplicity. 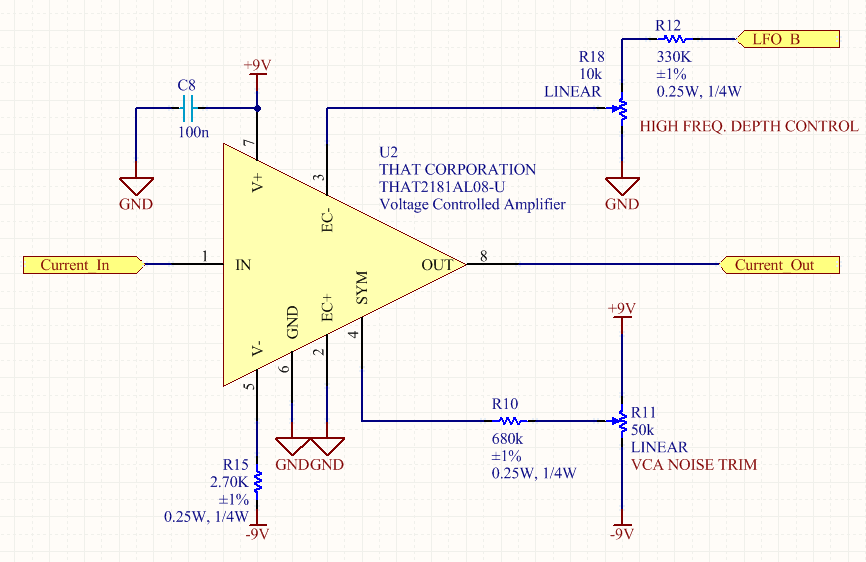 The VCA I chose for this design is of the respected THAT218X series of VCAs. Like many VCAs, this device operates on a current signal, but has multiple voltage control ports that determine the specifics of that operation. The specifics of VCA operation are beyond the scope of this article, so curious readers should page through the device's datasheet for a more thorough discussion. Here, I will go over the aspects of the VCA's operation as they pertain to this design.

In practice, the current signal operation means that conversion from one mode of signaling to another is required around the VCA. This sounds more complicated than it is -- the simplicity will become apparent during the discussion of following circuits.

The most important part to consider in this application is the relationship between the voltage at the EC- pin and the amount of signal current passed from pin 1 to pin 10. With zero voltage on EC- (relative to ground), the VCA passes all of the input current to the output. If a positive voltage is applied to EC-, the current passed from input to output will be reduced exponentially with that voltage. In this way, the VCA controls the current gain from 0 to -90dB.

In this application, a slowly varying DC signal is applied to each VCA's EC- pin. This signal enters the VCA subcircuit via the LFO port indicated in the schematic. How much of this DC signal is allowed to affect the VCA gain is controlled by the HIGH FREQ. DEPTH CONTROL potentiometer.

The "SYM" pin is also an important part of the circuit. By applying a small voltage to this pin, the VCA can be adjusted to introduce the least amount of noise possible to the circuit. 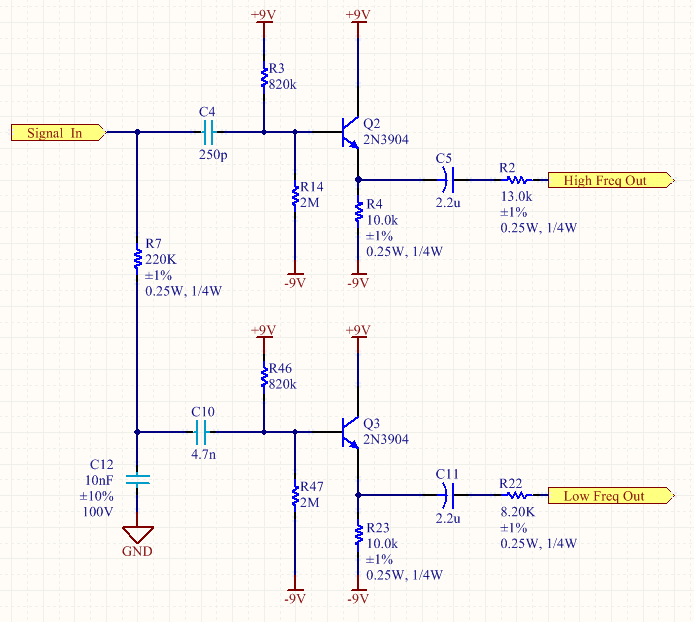 Figure 4. The frequency-splitting stage of the harmonic tremolo, shown with voltage-to-current conversion resistors at the outputs.

Truth be told, the frequency-splitter circuit is quite simple. The RC network made up of R7, C4, C10, and C12 split the audio signal at about 320Hz. Higher frequencies take the path on the top half of Figure 4, and lower frequencies take the path on the bottom half. This circuit is nearly identical to that seen in the original fender schematic, but with some minor changes in order to use component values that are easier to come by.

The voltage-to-current conversion step for each band is merely a resistor (R2 and R22). The inputs to the VCAs look like ground, so the values of these resistors determine the amount of signal current that enters the VCA for each band. Lower resistor values mean more current enters the VCA. R22 is smaller than R2 to correct for a perceived reduction in volume of the lower frequencies while this effect is engaged. 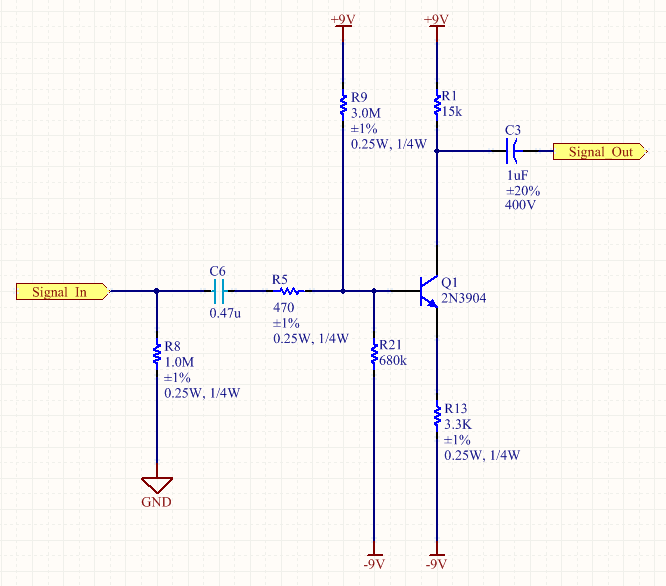 Figure 5. The input stage of the harmonic tremolo.

Driving the frequency-splitter is a simple input stage. This circuit does three things: It provides the guitar signal with a high-impedance load, increases the amplitude of the guitar signal by about 12dB, and provides the frequency-splitter circuit with a low impedance signal. The gain is required in order to maintain a good signal-to-noise ratio in the rest of the circuit. Even after trimming the SYM pin on the VCAs, the circuit's noise may be unacceptable if the input stage doesn't provide enough gain. 12dB was chosen for the gain as a good compromise for a variety of guitars and playing styles while still keeping the stage's output signal within the limits of the voltage rails (+9V and -9V). 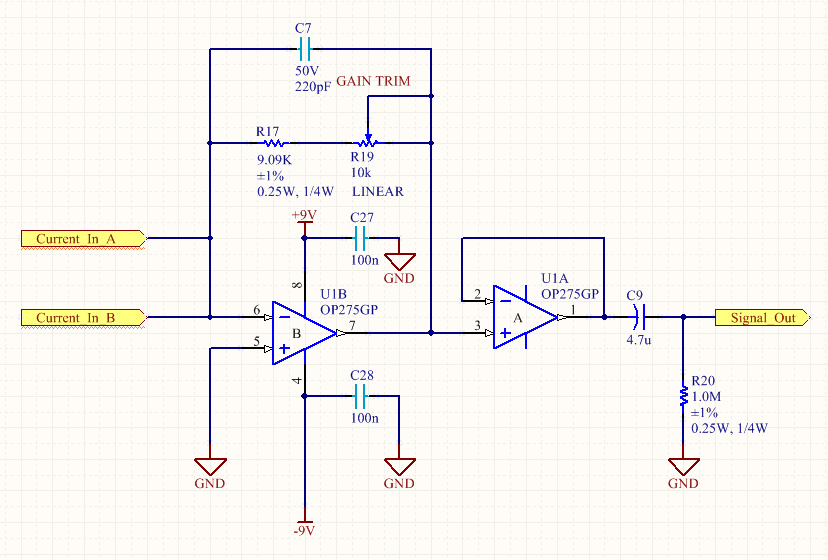 Figure 6. The current-summing circuit of the harmonic tremolo. This circuit adds together the output currents of the two VCAs.

Moving to the end of the signal path, we have the current-summing circuit. As mentioned before, the VCAs output a current signal instead of a more standard voltage signal. This circuit adds the current signals from each VCA together and converts them to a voltage. The conversion ratio is controlled by R17 and the setting of the GAIN TRIM potentiometer. Generally, the conversion can be expressed mathematically as V_OUT = I_IN * R_FB where R_FB is the total feedback resistance seen by the OpAmp. The "GAIN TRIM" potentiometer is intended to be set so that, on the whole, the effect does not increase or decrease the perceived signal volume. C7 simply acts to remove some very high frequency noise. The signal out port is the output node of this effect, U1B is merely acting as a buffer to drive whatever circuits come after this circuit. 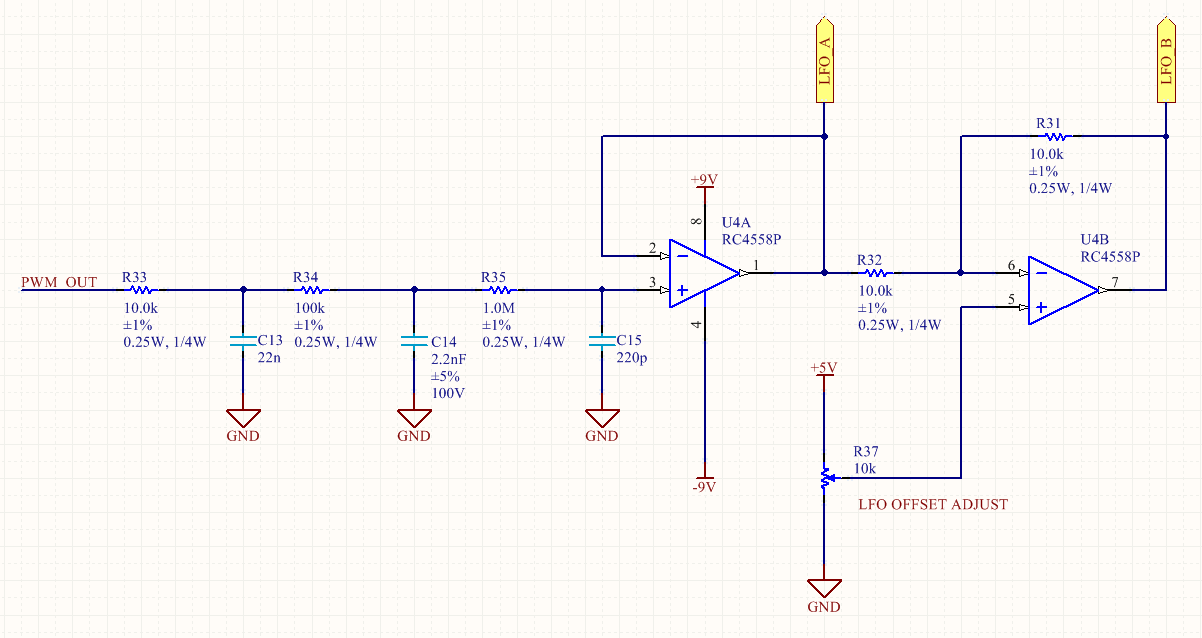 Figure 7. The PWM filter, control signal buffer, and control signal phase reversal circuits of the harmonic tremolo. Not shown here are the microcontroller circuit, the oscillator speed control potentiometer, and the oscillator waveshape control. Please see the full schematics for a complete picture of this design.

Instead of generating the phase-inverted low-frequency control signals for the VCAs with a phase-shift oscillator and phase splitter as in the Fender Super Amp, I went with a more modern approach of using a microcontroller to generate a single oscillator signal via PWM, and then used some simple analog circuits to process that PWM signal into something more useful. The advantage to this approach is that the oscillator amplitude can be independent of oscillator frequency. This means that the tremolo effect can be very slow or very fast while retaining the same intensity -- a feature absent from the original phase-shift oscillator! Additionally, using a microcontroller means that multiple oscillator waveshapes can be used without increasing the component count significantly. This gives the user more control over how the effect sounds than was available in the original Fender amplifiers.

The PWM processing circuits are shown in Figure 7. I've omitted the microcontroller schematic here since it's trivial. The complete circuit is described in the full schematic, of course.

The left-hand side of the diagram shows the PWM filter. This filter is a passive fourth-order filter and does a great job of converting the PWM signal from the microcontroller into a smooth analog waveform. Note the scaling of RC values with each successive stage. This is done to prevent the proceeding stage from heavily loading the proceeding stage.

The right-hand side of the diagram shows the oscillator buffer circuit and the phase-reversal circuit which generates an opposite-polarity control signal. This phase-reversal circuit is a textbook inverting OpAmp circuit with a simple offset adjustment control tacked on. The offset adjustment control is useful to ensure that both control signals reach the same upper and lower bounds. 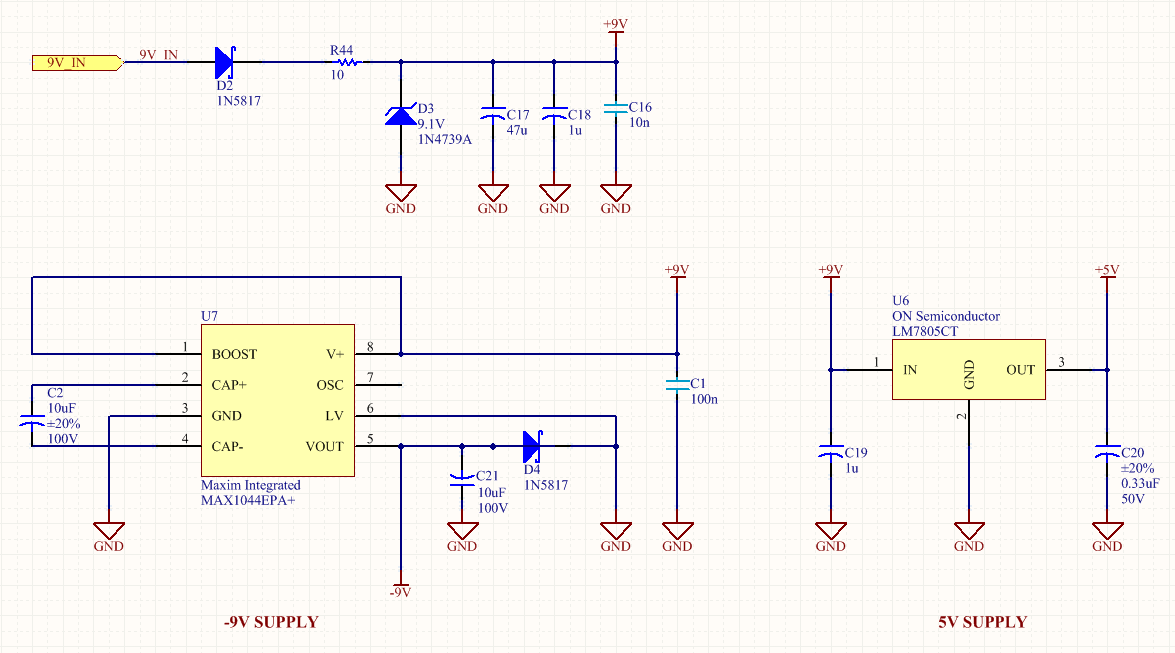 Figure 8. The power management circuits of the harmonic tremolo.

A positive and negative 9V supply was chosen for this circuit instead of the more common single positive 9V supply found in guitar effects for a few reasons. First, the VCAs require a bipolar power supply to function correctly. Second, a bipolar power supply allows for greater signal levels and therefore greater signal-to-noise ratio. Finally, using 9V means that no special power adapter is required for this circuit.

The 5V linear regulator is simply there to power the microcontroller.

Below are some audio clips recorded to show off the sound of the Harmonic Tremolo.

A take on the sample from this article's beginning:


These clips were recorded with a Fender Jaguar Baritone Custom plugged directly into the Harmonic Tremolo. The output of the effect was plugged directly into a KMI K-MIX feeding REAPER. A small amount of reverb from the Alesis MIDIVERB II was added, as well as a little compression from REAPER.

Below are links to the files needed to build the PCB I designed for this project, the bill of materials, and the binary to program the microcontroller with. Armed with these items, anyone could build the harmonic tremolo described here. Please note that the bill of materials does not include things like switches, jacks, and the potentiometers for the control knobs.

The complete schematic is also given below.